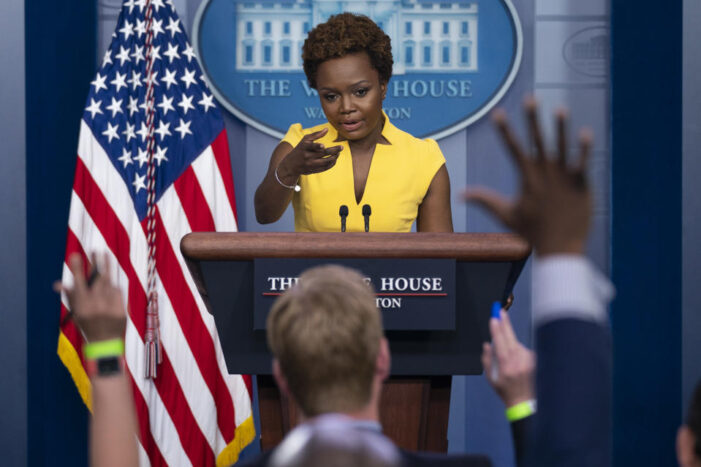 On Wednesday, like Psaki and generations of White House spokespeople before her, Jean-Pierre leaned heavily on a binder full of prepared notes and statements, as she fielded questions on topics including the Tokyo Olympics and the origins of the coronavirus pandemic.

“It’s a real honor to be standing here today,” Jean-Pierre told reporters when asked about her historic turn. “Clearly the president believes that representation matters, and I appreciate him giving me this opportunity.”

Judy Smith, who served as deputy press secretary to President George H.W. Bush in 1991, was the first Black woman to take on the role. Jean-Pierre is a longtime Democratic political hand who was the top public affairs staffer for the progressive group MoveOn.org before she joined Biden’s presidential campaign.

Jean-Pierre, a Haitian American activist born in Martinique, is seen as a potential successor to current White House press secretary Jen Psaki, who has publicly said she only intends to serve in the role for about a year, and Wednesday’s appearance was seen as an audition of sorts for the job. Jean-Pierre fields press requests and makes frequent appearances for the Biden administration on cable news.

Is Karine Jean-Pierre making history as the first black woman giving White House briefing added by haitihebdo on May 26, 2021
View all posts by haitihebdo →